Elena Alexeievna Rodinova (born April 12, 2010) is the daughter of Natasha and Alyosha Nikitin. She was one of the first Chronophontian

children born on Chronophontia island. She is the oldest of the Chronochildren at the age of five years old and has been shown to be very smart.

Elena was born April, 12, 2010 at 8:36AM to Alyosha and Natasha Nikitin in Chronophontia Island, Chronophontia. From the moment of her birth it was a celebration as many children of the island were often born in other places and she was first one to be born directly on the island. For the first three years of her life she was with her mother being loved and cared for until she was old enough to be taken care of by the others as well. She is a very smart and cute little girl who has shown streaks of mischief and a talent in learning how to use magic. 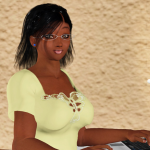